realistic and fun ways of training

In my teaching folder I have a list and description of 56 different games and drills that I use in my Krav Maga classes here in Stavanger. They all have a specific training purpose and many I will adapt for variations in theme and focused points. Some of them are drills and games I have learnt from my training background in Krav Maga and other Martial Arts... But most of these have been created and developed by me. Below you will find a few examples that I would like to share with you.
Touch the T-shirt:
It is quite possibly that this is the most common game played in the class at a Krav Maga Club. It was one taught to be during my time with the BKMA in Bristol. I use it as a warm up drill right after the activation exercises to get the class energised and ready for training. You may know it as "Hand fencing" or perhaps by another name.

It is a reaction training drill (not sparring). The aim is for students to touch each other on the shoulders, and avoid being touched themselves. Situational awareness, striking speed and opportunity seeking, as well as blocking and reactions are trained in this game. I add a little variation in targeting and sometimes limit to training between partners or open it up to wider group engagement. There is lots that I do in this one to keep the group active and moving.

The Bastard:
This one is not a game. But often in training I find that my class does not divide equally. Most drills that we practice are done with a partner... so I have developed a system for an odd number class whereby the last student (who obviously doesn't have a partner) becomes "The Bastard". It is up to me as the instructor to decide the Bastard´s fate or role in the following few minutes. Either, the Bastard does 20 Burpees (or some form of physical punishment... I find this helps the students to partner up quicker), after they have performed the exercise they then select the next Bastard...
OR they can have a more active role in the class, where they can walk around with a pad or training weapon and surprise attack the other students.

The Hunger Games:
This one is a lot of fun. The students space out around the perimeter of the training area. In the middle pile up the equipment, can be anything... Pads, training weapons etc. I make sure that there is enough kit for 1 between 2 so that they can partner up when I start the game.
When I give the command, and they rush in to get the kit and quickly partner up. I sometimes set the theme of the training drill, "only kicks" for example so that they can focus the training on a specific aspect of Krav Maga. I don't allow them to get complacent in the drill, I keep it moving at a fast pace and add in a few little extras to maintain the fun and excitement of the training. 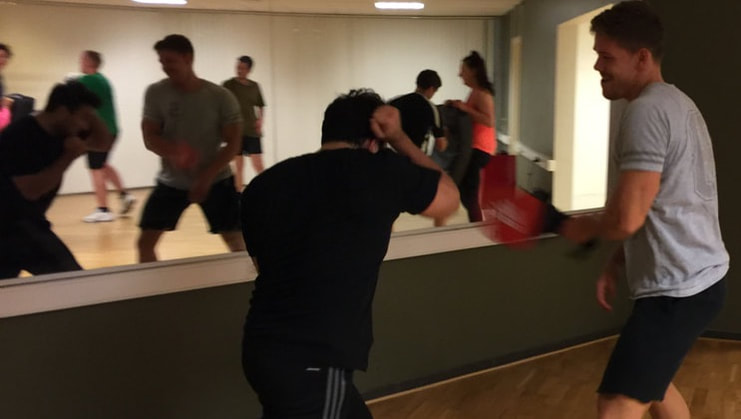 The Ring
This is a good beginner pressure test. One student is on. They stand in the middle, surrounded by all the other students. Everyone else is armed or equipped with a pad, they are also numbered. I call out a number and that student approaches the one in the middle, they get dealt with and return to their position.
Variations on this are immense. I can of course control the style and speed of the attacks, as well as the distance from the ring to the middle. Multiple numbers can be called for more advanced students to deal with multiple attackers. And to make it a little more disorientating, students can walk in a circle around the student who is on. 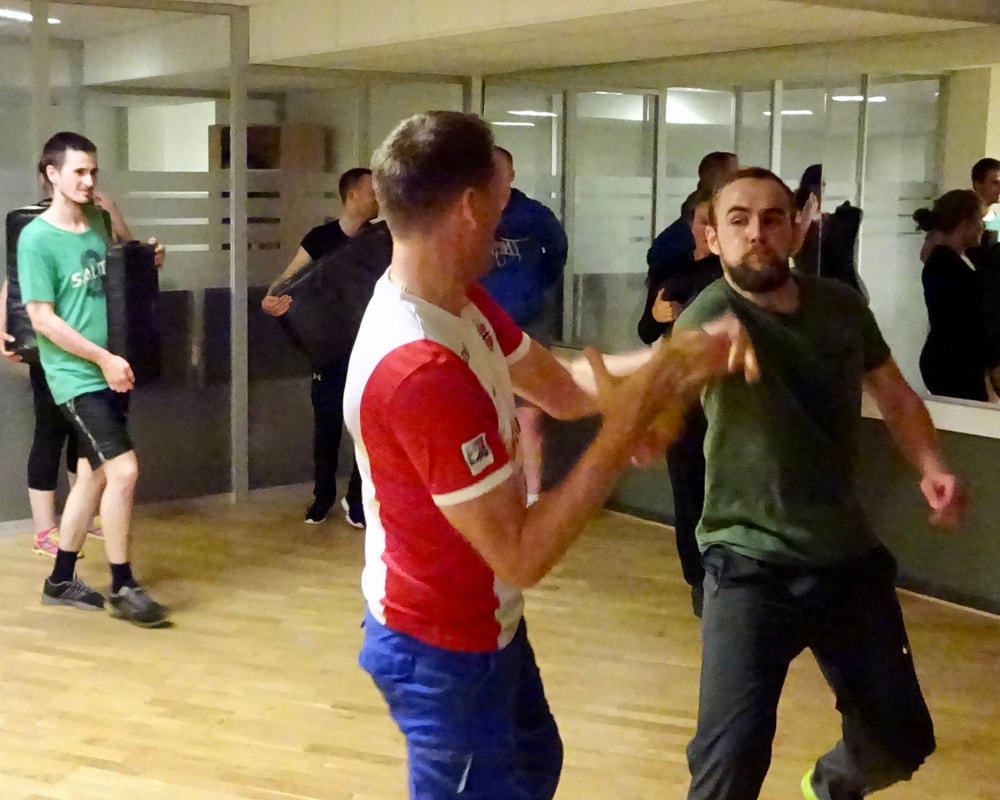 The Shark Tank:
Similar to THE RING. But all the students are on the move. They walk randomly around the student who is on, but only attack when their number is called. 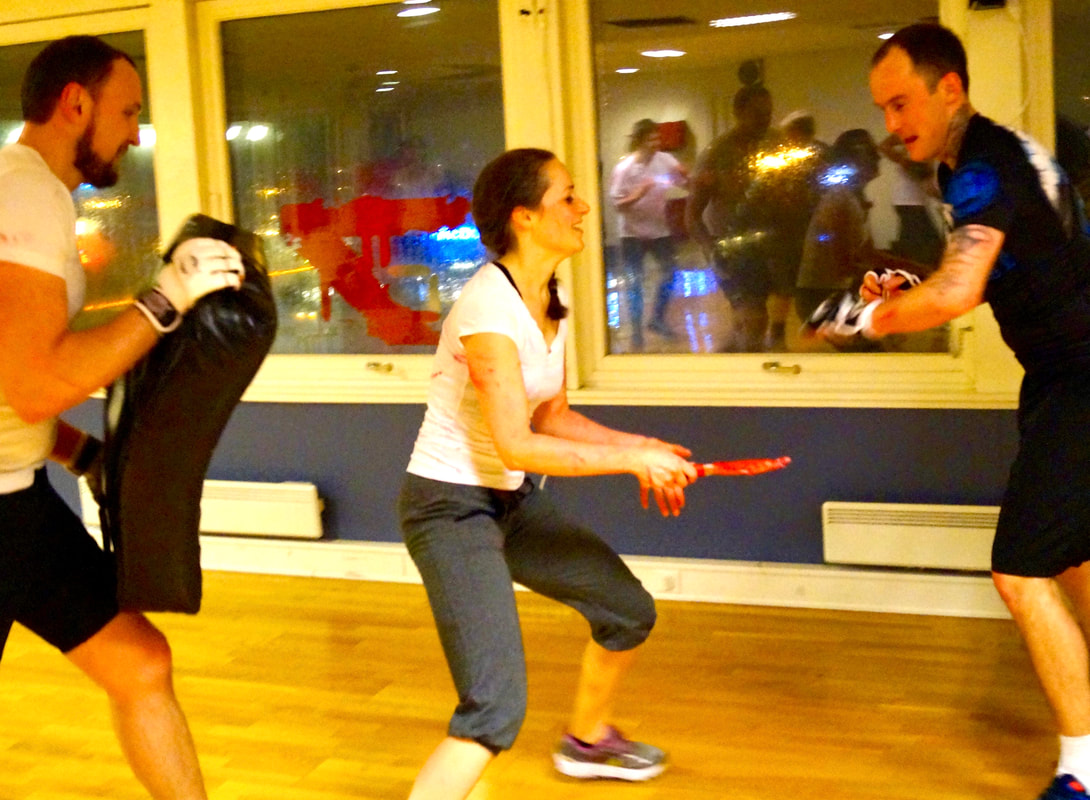 The French Column:
Those at all familiar with the Napoleonic wars understand why I named this one THE FRENCH COLUMN.   This is a simple Pressure Test drill. One person is "On", the others are equipped and queue up in single file facing the On student. They attack the student one at a time in sequence using whatever equipment they have chosen or been assigned. The good thing about this is that it is well controlled. The On student can clearly see the danger and knows what is coming (unlike in The Ring or Shark Tank where there is the added complication of multiple attackers and multiple angles to defend). I also stand relatively close and give immediate feedback to correct issues, motivate and guide them through the drill. 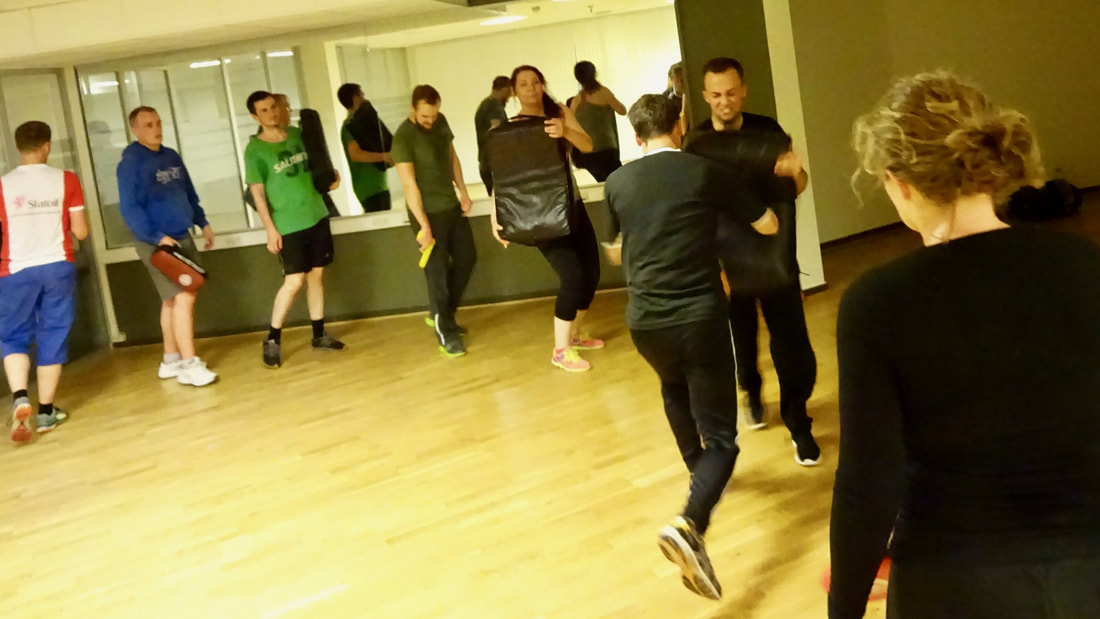 More information:
As I mentioned at the start of this page, I have 56 games and drills detailed in my teaching folder. Some I use far more than others, but they are all geared around maximising the learning process and making the Krav Maga classes I teach in Stavanger efficient and fun.

Here are a few more examples, that students of mine will recognise, and if you don't, you´ll likely be getting familiar with them over the next few weeks:
Cinderella, Protect the Princess, Compass Points, As & Bs, Zombie Apocalypse, Baseball, Slap Circle...
​
... THEY LOVE IT!